End of an era at Get FISA Right 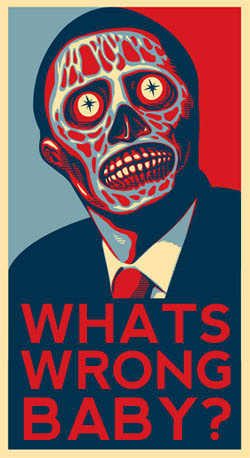 The worst part of all this is that nobody cares. None of our three major daily newspapers made this front-page news. Virtually none of the blogs I read highlighted it. Even my Twitter feed only mentioned it sporadically.

And of course, that includes me. I didn’t write about it either. Glenn thinks that liberals have largely given up criticizing this stuff because we now have a Democratic president in the White House rather than George W. Bush, and I suppose that’s part of it. But a bigger part, I think, is simply that it’s all become so institutionalized. Back in 2004 and 2006, we were outraged because this was all so new. Today, after fighting and losing, it’s just part of our brave new world, along with 3-ounce bottles on airplanes, unreviewable no-fly lists, and cops who demand to know what you’re up to if you start taking pictures in public places.

As a country, we’re now divided into two parts: those who aggressively support things like warrantless wiretapping because they’re consumed with fear, and those who don’t but have given up trying to fight about it. There’s hardly anyone left still willing to tilt at this particular windmill. It’s sad as hell.

The complete silence here bears Drum out in much of what he writes.  That silence included me, it included Jon Pincus, Harry Waisbren, and the many others who were once consumed with the effort to make opposition to Bush-era surveillance state carry over to the Obama administration.  Last week, Marcy Wheeler reminded readers that Obama said this, once upon a time:

Given the choice between voting for an improved yet imperfect bill, and losing important surveillance tools, I’ve chosen to support the current compromise. I do so with the firm intention — once I’m sworn in as President — to have my Attorney General conduct a comprehensive review of all our surveillance programs, and to make further recommendations on any steps needed to preserve civil liberties and to prevent executive branch abuse in the future. [snip]

I do promise to listen to your concerns, take them seriously, and seek to earn your ongoing support to change the country. That is why we have built the largest grassroots campaign in the history of presidential politics, and that is the kind of White House that I intend to run as President of the United States — a White House that takes the Constitution seriously,conducts the peoples’ business out in the open, welcomes and listens to dissenting views, and asks you to play your part in shaping our country’s destiny.

Glenn Greenwald, referencing Wheeler’s post, adds, “Needless to say, none of that ever happened. Now, the warrantless eavesdropping bill that Obama insisted was plagued by numerous imperfections is one that he is demanding be renewed without a single change.

But additionally mortifying, for us, is that this site and its advocates have played a role in letting him get away with that.  How?  By functioning as an ineffective diversion — a playground where the misguided could pretend we were effective opponents of the FISA Amendment Act and Patriot Act when we weren’t.   The approach taken — an allegedly “proud group of Obama supporters” asking him “to get FISA right” — has been conclusively shown to be without merit.  It made a little sense in 2008; it makes no sense whatsoever now: we can’t possibly be a proud group after letting this debate go unremarked and unopposed; many of us are no longer Obama supporters; and there is no chance that Obama will get FISA right.  Our current charade must end, one way or the other.

Accordingly, I’m unilaterally pulling down the Get FISA Right logo and replacing it with “What’s Wrong Baby” for the time being.  (The logo and slogan are a reference to the John Carpenter movie “They Live”; yes, it’s over the top, but at least it recognizes who our political foes include.  Think of it as a declaration of independence.)

It might well be a better, simpler alternative to delete this site altogether — “Strike another match, go start anew.” That won’t bother me too much, but we did some worthwhile things along the line here that maybe deserve to be preserved — fundraising for Feingold, the ads at the 2008 conventions and later, attempts to inform ourselves and others about the politics and policy of surveillance and civil liberties.

One way or another, we have to step back and realize that to “Get FISA Right,” we will first need to get “Get FISA Right” right. That starts with ditching a painfully embarrassing logo,  revising our “About” statement, consigning the old one to the archives,  and going from there.

The floor is yours.