Hi, “Get FISA Right” friends — it’s been a while! I’ve been active with a local civil rights/civil liberties group I helped start, the Montgomery County Civil Rights Coalition. While we usually concentrate on local civil liberties issues — Metro transit system bag searches, county youth curfew and loitering/prowling proposals — we did something new last night and went to an Obama campaign HQ to protest and educate about the NDAA (National Defense Authorization Act). I’m crossposting my post about the visit to this blog to let you know about it, since it kind of fits the Get FISA Right “engage Obama” style.  — Thomas Nephew

President Obama announced last week that he was not planning to veto the National Defense Authorization Act — a bill with provisions upending the Constitution, the Bill of Rights, and arguably common law dating back to the Magna Carta: the right to a trial and to not be imprisoned without review.

MCCRC activists were determined to weigh in on a decision that will have terrible consequences for the rule of law in this country. We decided to select Obama’s Montgomery County, Maryland “Organizing for America” headquarters in Kensington, on Wednesday during evening phonebanking hours. Our goals: (1) to serve notice that we’re willing to protest President Obama’s plans or decisions when necessary, “even” in an election season, (2) to engage Obama volunteers about the NDAA bill, (3) to persuade some of them to call the White House — (202) 456-1414 — and urge Obama to veto the bill, and (4) to discuss with them the general “security at the price of liberty” policies that have accelerated since 9/11 — and that have been continued or even expanded under the Obama administration. 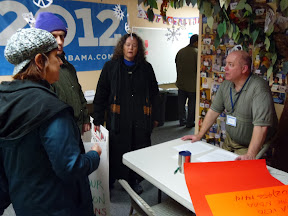 We talk with the campaign's evening office manager. Click the image for a slideshow of the protest.

Obama volunteers — whether inside the office or at the building entrance — were surprised to see us, and many told us they hadn’t heard about the NDAA bill before we had spoken with them.

For his part, the evening office volunteer manager was willing to hear from us, and listened with interest as we explained our problems with the NDAA. He said he would share the news and reasons of our visit with higher-ups in the Obama campaign organization.

He also agreed to distribute about a dozen copies of our one page, two-sided informational flyer to the evening’s volunteers. The flyer featured the New York Times editorial “Politics over Principle” on one side and excerpts from Glenn Greenwald’s “Three myths about the detention bill” on the other. As these articles explain, the bill…

While too much of the above has already been occurring, it’s a legally meaningful and bad thing for such practices to be expressly codified by Congress and signed by the President. It’s additionally disappointing — and ominous for democracy — that a president who campaigned on the “Hope” for “Change” so many of us shared, and who specifically opposed many of these measures on the campaign trail, might now choose to make them the law of the land.

Many of us believe it’s important to take a stand against these encroachments of our rights and liberties — wherever we are, and no matter who is responsible. By next Wednesday, we sadly anticipate that President Obama will have signed the NDAA into law.

So we’re asking everyone in our area to join us that next Wednesday, December 28, at 4:30pm at 3750 University Blvd. West, Kensington MD (map)* to protest the NDAA’s passage at Obama for Maryland headquarters. And we hope Americans elsewhere will do the same at the Obama campaign headquarters nearest to them.